Indiana mom Allison Smith, who shaved in honor of her son Jackson, a brain tumor survivor. Photo by Connor Sumner.

When Maisy Yeager’s son, Zarek, was just 8 years old, he was diagnosed with acute lymphoid leukemia. “It’s horrible, hearing the words ‘Your kid has cancer,’” Yaeger, a pharmaceutical biochemist from Massachusetts, told Yahoo Health. “It’s unimaginable, the dread of loss you feel.”

Luckily, Zarek is now cancer-free, making it through years of draining surgeries and steroid treatments that turned the family’s world upside down. But countless other children — nearly 2,000 a year, according to statistics from the National Cancer Institute — are not so lucky. It’s why Yeager and 45 other mothers from around the U.S. and Canada convened in Boston on Sunday to have their heads shaved bald in a public ceremony for the fifth annual 46 Mommas event — so-named to symbolize that each weekday of the year, 46 mothers in the U.S. are told that their child has cancer. This year, through pledged donations, the moms raised more than $200,000 for the national St. Baldrick’s Foundation, which fundraises for pediatric cancer research, adding to the $1.5 million the event has pulled in over the course of five years. After all, Yeager noted, “My kid survived because of research.” 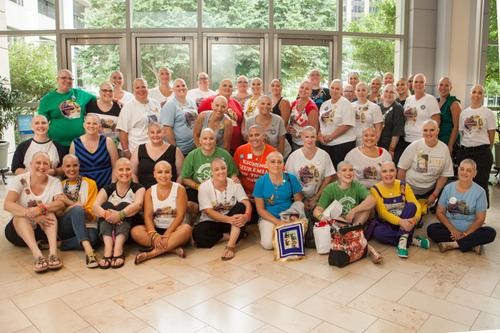 St. Baldrick’s Foundation CEO Kathleen Ruddy praised the mothers in a press announcement about the event. “We are so humbled by the outstanding commitment and fundraising accomplishments of all 46 Mommas team members,” she said. “Since the team’s inception in 2010, these brave women have provided hope to so many across the nation and around the world. We are so thankful for their incredible efforts and unwavering support of the St. Baldrick’s mission to conquer childhood cancers.”

Send us a note and a link and we'll share it.

Color Me A Cure Donation